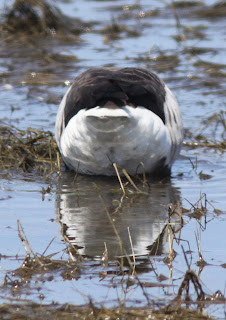 This week's quiz bird is standing in water facing away from us, allowing us view of only the vent region, the flanks, a bit of the sides, a bit of the rump, and some parts of the wings. The robustness of the bird suggests some sort of waterfowl rather than a shorebird or some other waterbird, or, as Kevin Kerr wrote, "another rear-view of a pudgy puddle-dweller." The flanks seem to have dark bars or something and the vent region is nearly entirely bright white. The wings are dark with paler fringes to the scapulars and with blackish primaries and secondaries that contrast with the browner wing coverts. Unless they're just muddy, the legs, at least what we can see of them, look black.

The placement of the legs (rather foward) and the bird's stance suggest that our bird is not a diving duck, which look at least a bit awkward standing. Various features also point away from the dabbling ducks, but I'm going to cut to the chase and suggest that the quiz bird is a goose, on the strength of the vertical darker bars on the flanks, as most of our "dark" geese sport such. The paler fringes on the wing coverts also suggest a species from that group. While the angle of the picture might be fooling us as to the color of the flanks/sides, they do look quite pale, unlike those of either Cackling or Canada geese. We can easily confirm that by studying the tail, particularly its color. The "white-cheeked" geese have tails mostly black, the tails of the two white-fronted geese have white-tipped dark tails, and our bird has a white tail with, perhaps, black corners. We are looking at the tail edge on and it's difficult to be certain of that black, but the white is anything but uncertain. Dark morphs of Ross's Geese can be excluded by our bird's lack of extensive white on the secondaries and greater secondary coverts.