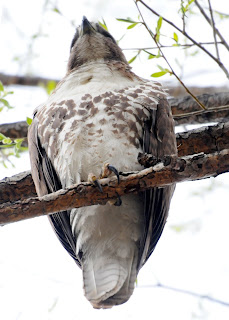 While all respondents agreed that this week's quiz bird was a raptor, there was wide disagreement as to exactly which species, which is a common theme of this quiz and of birding. Raptors are not well-known, particularly perched ones. Peter Wilkinson submitted an excellent answer, with which I'll start this solution.

"Ah, a bird of prey (those feet, that bill), but from an unusual angle (to say the least). The basic clues we have are tail shape and pattern, the colour of the underparts, and the pattern of some wing coverts on the left wing, which are, fortunately, enough to go on. The tail is extremely useful. The shape of the individual feathers makes it clear that the bird is a buteo of some sort. Then there is the pattern of a large number of wide pale bars separated by thin dark bars, with no obvious broader dark sub-terminal bar (though one should probably not bet too hard on that). Fortunately, many of the buteos show quite distinctive tail patterns and the only real candidates showing such a pattern are juvenile Swainson's and Red-tailed hawks. Given the colour morphs of both species and the variety of subspecies of Red-tailed the underparts are probably not going to help us much, though it has to be said that what we can see is classic for pale-morph Red-tails. Fortunately, there is a clincher. We can see just enough of some wing coverts on the left wing to make out that they are barred. These are diagnostic of Red-tail, being plain in Swainson's."

Chishun Kwong used an old saw to get to the correct answer -- it's surprising how often it works!

I would like to reiterate a point that Peter made: tail pattern rules out most ABA-area buteos. Additionally, Red-shouldered Hawk never has this pale of a throat, not such white underparts. Juvenile Broad-winged Hawks with breasts this unmarked would also have the rest of the underparts mostly unmarked. Juvenile Swainson's Hawks are exceedingly variable in appearance, but they tend to cream-colored of buffy ground color on the underparts, except when quite worn and bleached, a time at which birds with bright white chests also sport fairly white heads. If one found oneself in the falcon camp (though, as Peter noted, the width of the individual tail feathers rules out that option), Prairie Falcon shows streaks (juveniles) or spots (adults) on the underparts, not broad bars. Finally, the pale throat, distinct belly band, dark auriculars, and nearly unmarked leggings point to the widespread eastern subspecies borealis.

One respondent got the species correct, but proposed an incorrect estimation of form directly in the answer, so was considered incorrect (please read the rules!). Steve Mlodinow took this picture of a juvenile Red-tailed Hawk at Boulder, Boulder Co., CO, in April 2011.

With three quizzes to go in the quarter, the competition leader board is headed by Robert McNab and Diane Porter with 9 correct responses.