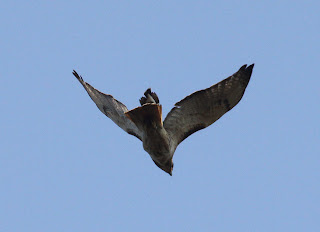 In birding, careful scanning often reveals individual birds theretofore overlooked. Margie Joy provided most of this week's answer and proved herself adept at transfering that birding skill to perusal of online photos.

"This week's quiz photo shows two birds, a raptor readily identified as a Red-tailed Hawk and a much smaller bird giving it the Dickens, a common sight hereabouts at this time of year.

"I identified the Red-tailed Hawk by its reddish tail and dark comma/dash underwing marks. This is how I first learned to ID Red-taileds, though it doesn't work for all color morphs and I've since learned several other ways.

"The smaller bird gives fewer clues to its identification. I can see only the back half of the underside of the bird, showing dark/blackish undertail with white tip, dark underwings, and white undertail coverts and vent. However, the obvious clue is behavior. Lots of small birds will mob a raptor, though not many are so aggressive as to get quite this close, and kingbirds come immediately to mind. Looking at ABA-area kingbirds, Eastern is the only one that matches the quiz bird's description. Other kingbirds share some, but not all, of this bird's features. Cassin's has the correct tail marks and wing color but has yellow undertail coverts and vent. Western is similar to Cassin's but shows white on the tail edges, not the tip. Thick-billed has very pale undertail coverts and vent, lacks white on its black tail, and has pale underwings. Undertails and underwings of other kingbirds appear to be much paler than the quiz bird's, and those undertails that could be called blackish in shadow lack white tips.

"Of course, not all birds that mob raptors are kingbirds. So, just to be sure all bases were covered, I looked for generally dark-tailed birds with white undertail coverts and vent. I found Black Phoebe, some of the blue-black swallows, and a gnatcatcher, but could not make any of them fit."

Thanks, Margie. I took this picture of an Eastern Kingbird mobbing an adult Red-tailed Hawk at Villas WMA, Cape May Co., 1 July 2009. Careful scrutiny of the mobbing bird in the expanded view provided below should tell us not only the species, but the sex, as the bird’s outermost primary (visible most easily on the left wing) doesn’t have the distinctive emarginated tip of a male kingbird, thus it’s a female (assuming that it’s an adult, which it is). 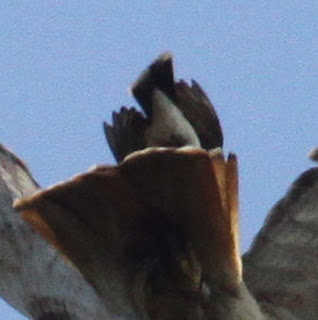 Four respondents provided only one species in their answers. One of those neglected to provide appropriate captilization to the one species name submitted.

After nine weeks, Joel Such holds sole possession of first place in the quarter's competition, followed closely by six others with 8 of 9 correct.