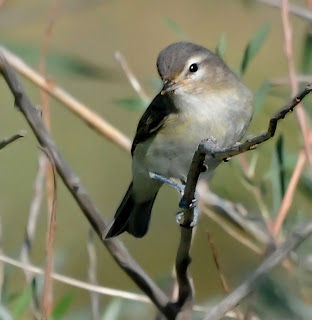 This week's quiz bird has bluish legs, which is a wonderful feature of all ABA-area vireos (and most of those of the world). Wonderful, because that character rules out so many other options when considering an ID, such as flycatchers and warblers. Our bird's lack of a distinct eye ring (and, less obviously, of wing bars) leaves us with the superciliaried-and-plain-winged vireo species options. The very dark irides rules out the various red-eyed species (Red-eyed, Yellow-green, and Black-whiskered; immatures have paler, browner irides than does our quiz bird and adults have, well, red eyes). Additionally, the lack of a distinct contrastingly darker lower border of the crown patch also eliminates Red-eyed. So, for the second week in a row, we find ourselves in the Warbling/Philadelphia morass.

This bird's obvious dark lores and apparently dark crown strongly suggest Philadelphia Vireo, but let's go through the motions and check other features to be sure of our tentative ID. As our eyes travel down from the head, they don't get too far when alarm bells start ringing: there is no yellow on the throat, which is distinctly and obviously bright white, lacking a suggstion even of cream. Whoa! Looking farther down the bird, we note the brightest of what little yellowish is on the underparts is on the side, a typical feature of Warbling Vireo and a deal-breaker for an ID of Philadelphia Vireo, on which the brightest yellow is on the center of the breast.

While the darkness of our quiz bird's lores seem excessive for Warbling Vireo, a small minority of Warblings sport fairly substantial dark lores. However, I believe that this picture exacerbates the true darkness, because we're looking nearly straight up the loral tract, which tends to make it look darker than it would from a more perpendicular view. Finally, while the crown looks dark gray (certainly darker than that of last week's quiz bird), we cannot compare that tone to that of the back, which is nearly hidden and in deep shade, anyway.

This picture, taken by Steve Mlodinow at Crow Valley Campground, Pawnee National Grassland, Weld Co., CO, in September 2011, points out one of the features of highly-skilled and experienced birders that can flummox beginning birders: the knowledge not only of field marks, but of knowing in what situations the appearance of field marks can lead one down the garden path.