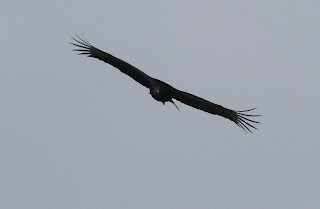 While the lighting on this week's quiz subject might make for tricky analysis of color, there really is little other than black visible in the bird's plumage. With the strongly-fingered hands, this must be a large and soaring bird. The bird's head appears slightly paler in color than the plumage and much of the bill looks to be paler than the head, in addition to the bill looking fairly thin. Finally, the outer six primaries seem to be a bit paler than the rest of the wing plumage.

While ravens do soar, they never sport the number and length of fingers visible here. While Snail Kites have fairly round wings, they don't sport the very wide and squared-off wings of our quiz bird, nor does the species sport that many fingers. Additionally, if the quiz bird were of that species, the plumage would require the bird to be an adult male, which sports an orange-red bill. Hook-billed Kite does sport very rounded/square wingtips and does come in a dark morph, but the base of the bill is pale (rather than the tip) and it has pale eyes. Juvenile California Condors have nearly entirely dark plumage and paler heads, but the tip of the bill is the darkest part of the bill and the bill is thick.

The angle of light on our quiz bird, as noted above, is tricky, with the underside of the wing being entirely shadowed, with the sun above and to the bird's right and with the right wing nearly edge-on to the sun. This means that the extensively white outer six primaries don't show up as white as they might have had we been looking up at those wingtips with the light coming through them. So, regardless of whether or not there are those that disagree with my assessments in the previous paragraph, the fact that the bird's outer six primaries are noticeably paler than the rest of the wing plumage really leaves us only one ID option. I took this picture of an adult Black Vulture over West Cape May, Cape May Co., NJ, in spring 2011.

One respondent's answer was precluded from being correct for the competition, as a guess on age was included directly in the answer with the species name ("young Black Vulture"). As I can demonstrate with the head being paler than the body plumage and the bill mostly paler than the head that it is an adult.... Another respondent's species answer lacked all capitalization and punctuation, so even if correct, would have been precluded from being correct for the competition. PLEASE READ THE RULES.