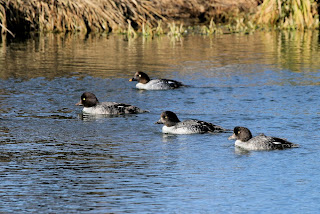 We've got four ducks and, as all respondents noted correctly, they are all goldeneyes. The first order of business is a refresher in some aspects of development in goldeneye soft-part colors (bill, eyes). Both species leave the nest as youngsters with all-dark bills and eyes, with both features changing gradually through their first fall/winter, and the rate of change is individually variable -- keep this in mind, as it is very important. Though young males' eye color changes, their bills remain all dark, as adult males of both species sport all-black bills. Adult female goldeneyes have at least some distinct yellow or yellow-orange on their bills, Commons with a sharply-demaracted bright tip to the bill and Barrow's with bills entirely or mostly colorful. (Though I have been told that adult female Barrow's have black bills in summer, I have not seen the species then, so cannot comment on the information's accuracy.) With the aforementioned variable rate of soft-part-color change, one can see immature goldeneyes in one day later in the season that sport muddy-yellow eyes and some with fairly bright yellow eyes. In this case, the brownish eyes are diagnostic for immaturity, but yellow eyes are not diagnostic at all. Finally, note that the change in eye color in all goldeneyes tends to happen sooner/more rapidly than does the change in bill color in females.

So, with that basis, let's ogle our quiz photo. The back bird is the only one present with any distinct yellow or yellow-orange color on the bill, and that bill has a well-demarcated yellow tip, strongly suggesting that this bird is an adult female Common Goldeneye. As with most all things bird-ID-wise, it is best to use more than one character to effect an ID, so we'll check head shape, which is the other really useful character in swimming-goldneye ID. Common Goldeneyes have a nearly triangular shape to the head, caused by the strong peak to the crown at or behind the eyes and with the head sloping down from that peak fairly evenly in both directions and with the meeting of forehead and bill not significantly altering the slope. Looking back at the bird in question: triangular head -- check; angle not appreciably altered at meeting of forehead and bill -- check. One down, three to go.

The right bird in the front row has a demonstrably different head shape than that of our adult female Common Goldeneye in the back, with the peak of the crown between the eye and the bill and with the forehead and bill forming nearly a right angle, very differet from the even slope of the front of a Common Goldeneye's head. Additionally, this bird's bill, though darkish, has an obvious suffusion of orange throughout. Also note that the color of the head plumage is a darker, colder brown than that of the Common Goldeneye in the back. This is an immature female Barrow's Goldeneye. One might also notice that this bird's eye color is not quite the bright lemon-yellow of that of the back bird's eye, a feature that suggests immaturity, but something that might be very difficult to determine on a lone bird.

The middle bird in the front row still has an all-dark bill, so is not an adult female of either species. Though this may cause us some problems with determining what this bird is, right next to the bill is a fuzzy patch of white. That white extends the entire height of the base of the bill and with the top edge in front of the eye. This is an immature male Barrow's Goldeneye with its facial patch coming in; remember that the patch on a male Common Goldeneye does not reach the top of the bill nor the eye and is shaped differently. Granted the head shape is not quite so steep as that of the right bird's, but the bird does sport the shaggy mane of Barrow's Goldeneye (the lower dark feathers on the back of the head are longer and create a bulge there that is lacking in Common Goldeneye). Additionally, this bird's eye is remarkably similar in color to that of the right bird's.

The left bird in the front row has its head turned slightly away from us, making correct assessment of various head- and bill-shape characters difficult. However, it has the same head color as the right bird and its bill, too, is suffused with orange, so this bird, too, is an immature female Barrow's Goldeneye. Note, though, that this bird's eye is a clear bright yellow like that of the Common Goldeneye, rather than like the other two members present of its age cohort.

A final note on bill size in goldeneyes. Though Barrow's Goldeneyes have, on average, smaller bills than do Common Goldeneyes, the actual size is not neccessarily an ID feature, as there is significant overlap in bill length and bill depth in the two species. In Table 10 in Pyle (2008), we can note that the range in bill length (exposed culmen) in Common is 28-41 mm, while that of Barrow's is 29-36 mm and that bill depth is 16.0-23.6 mm in Common and 18.4-24.5 mm in Barrow's. So, in both dimensions, the range of Common Goldeneye entirely covers the range in Barrow's Goldeneye.

I took this picture at the Silverthorne sewage pond, Summit Co., CO, on 18 November 2006. Two respondents got the location correct, though both omitted the second 'e' in the town's name.

Eight respondents submitted answers with only one species of goldeneye, six going for Common. Two among the correct responses made for a quandary. In the past, answers have been considered correct solely on providing for the correct species in multi-species quizzes, without care as to whether or not the respondents correctly identified the individual birds. For this quiz, though I counted these two answers as correct, I was tempted not to, as the guesses as to which individuals were referable to which species were so tied up with the respondents' official answers, but with half or all of the individuals incorrectly allocated. In future, please separate your individual IDs from your official submission of what species are present, or the answers might be considered incorrect.

Incorrect species provided as answers:
None