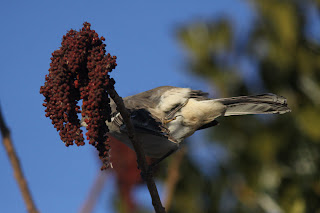 Size is just about the first feature that birders use when identifying (or recognizing) any particular bird. In the field, this feature is often readily discernible (and mostly used with little conscious thought), but in pictures, one usually requires some specific frame of reference and that is the focus of today's picture. This picture also harps on the importance in birding of knowing at least something about the plants making up the habitats in which birds reside.

Our quiz bird is perched on a branch of sumac, with a stereotypical cluster of sumac fruit providing an excellent direct size comparison: the cluster is nearly the size of the quiz bird. While I don't know that I can identify the species of sumac for certain, that facet doesn't matter all that much, as there is not a huge variation across the sumac species (that I know) in their respective fruit-cluster size. If that is true, then our quiz bird is not particularly small, but also not all that large, either -- perhaps, the size of an American Robin (or so).

Now that we've tackled size, we'll move on to structure. The placement of the bird in the picture doesn't allow us to make any firm conclusions about aspects of the head, but the bird's tail looks longish. The legs also appear fairly long, with the long distance between the toes and the "ankle." Additionally, while the wings are not very long, we can see a fair bit of primary projection (distance from wingtip to tip of the longest tertial), so the wings are far from short.

Plumage-wise, it looks like the forehead, nape, back, and wing coverts are medium gray; the chest is grayish; the belly is white; and the flanks and vent region are buffy, with the former being lightly streaked with brownish-gray. The tail is a bit tricky to correctly assess, but the outermost rectrix (plural rectrices) is nearly entirely white and best seen on the tail's right side (the outermost is the shortest one here). Finally, there are two obvious white wingbars (which should readily eliminate any of the gnatcatchers, if size didn't do the trick).

So, a medium-sized passerine with gray upperparts, pale underparts, white wingbars, long legs, and a longish tail. The solution set is pretty small with, perhaps, only a few reasonable options: Scissor-tailed Flycathcher, Northern and Bahama mockingbirds, and Sage Thrasher. The flycatcher can be ruled out by our bird's tail (it's just too short, even for a juv) and streaked flanks, among other features. Bahama Mockingbird usually shows much more streaking underneath than does our quiz bird and lacks such large amounts of white in the tail. These exclusions leave us with Northern Mockingbird and a worn Sage Thrasher (it would have to be quite worn with such little streaking visible. But, again, the extensively-white outermost rectrix rules out the species, as does the extensive black bases to the median coverts (the tips of which form the upper wingbar).

I took this picture of a first-year Northern Mockingbird along Stevens St. in West Cape May, Cape May Co., NJ, on 24 December 2009. Below, I have provided another picture in the series I took that day. 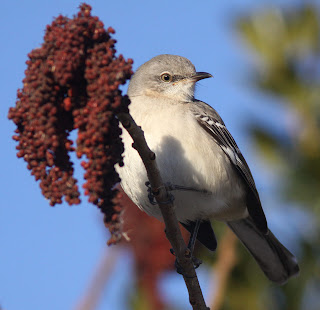 One respondent's answer was precluded from being correct for the competition, as it used the wrong modifier ("Eastern") and lacked appropriate capitalization for the group name.