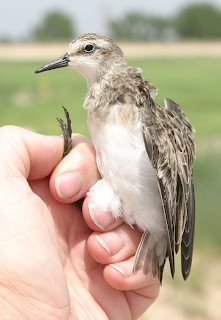 Almost nothing can challenge the ID capabilities of even skilled birders quite like encoutering a bird in hand, particularly a species that s/he usually sees at some distance. Such birds almost always appear either quite a bit larger or smaller in hand than they do in the field, small birds larger, large birds smaller. Since size is one of the very first clues used in ID, this first incorrect impression of size can start potential identifiers down the wrong road right from the get-go.

This week's quiz bird was apparently obviously a shorebird, and a small one at that. The longish, thin bill rules out the plovers, so the small size should force us to start in that beloved genus, Calidris. Unfortunately, because my hand is in the way, we cannot determine if it has a hind toe or not (Sanderlings lack the thing), so we don't get that easy out. We can see, though, that the legs are dark, enabling us to immediately rule out Least Sandpiper and Long-toed and Temminck's stints and the many yellow-legged larger sandpipers (Pectoral, Sharp-tailed, Buff-breasted, etc.). Such species are also eliminated because they are larger; similar-sized dark-legged species can also be ruled out (e.g., Red Knot and Wilson's Phalarope). Even though we may wish to avoid it, there's simply no option to our quiz bird being one of those small Calidris termed (at least in North America) peeps or a Sanderling. However, Sanderling can be readily eliminated due to our bird's overall color and too-extensive underparts markings.

With the yellow-legged peeps excluded, we need to narrow our choices down from the existing list of such: Semipalmated, Western, White-rumped, Baird's, Spoon-billed, and Broad-billed sandpipers and Little and Red-necked stints. Both Spoon-billed and Broad-billed sandpipers can be quickly eliminated, the former on the bird's bill shape and the latter on the bird's lack of the split supercilium typical of Broad-billed. White-rumped might be considered, as what we can see of the area above the tail certainly appears white. However, all these species have whites sides to the rump. The critical thing is to see the center of the rump, something that we cannot be certain of doing in this view, though that single dark feather behind the bird's left wing could certainly be a central rump feather. With the bird this close, though, we really ought to be able to detect the pale base to the mandible that is so typical of that species, and it is just not present. The similar Baird's Sandpiper would have more of a hooded effect, rather than our bird's whitish chin, throat, and -- possibly -- central breast.

Unfortunately, the above paragraph leaves us with a very difficult set of species, Semipalmated and Western sandpipers and Little and Red-necked Stints. Perhaps we should attempt ageing the bird as the process may assist with ID. Our bird's upperparts feathers don't look all that interesting, being primarily dull brown, but some of the scapulars are somewhat warmer with obvious pale fringes. These fringes, though, are quite narrow, suggesting that our bird is primarily (if not entirely) in juvenal (= first basic) plumage. Because there are fringes, we should be able to rule out either formative (first years) or definitive basic plumages (adults). In that case, the smudgy brown on the sides of the upper chest also suggest immaturity, thus a bird in primarily juvenal plumage. Finally, the lack of strong gray tones to the plumage can also help us rule out non-juvenile peeps of any of these species.

What the above gets us, then, is that our bird cannot be a Western Sandpiper, as even somewhat worn juveniles ought to show at least some rufous-edged scapulars, a feature missing from our bird. This fact also agrees with our bird's bill shape, fairly thick-based and short with only the barest suggestion of a drooped tip, and one that is not particularly finely pointed. Wonderfully, that thick-based and not-pointed shape should also help us rule out the two stints. If that darned photographer would just have given us a view of the toes from above or below, we could quickly decide among Semi or the two stints, as the latter lack the partial webbing from which Semi gets its name. However, one feature unmentioned in any shorebird literature that I've seen, but one that popped out at me in my research for this answer, is the minimal gape apparent on our quiz bird. In the pictures I perused, both Little and Red-necked stints showed rather significant indentations of gape, while both Semipalmated and Western either lacked such or nearly did. I'll have to look into this further (answer posted 26 May 2010).

I took this picture of a juvenile Semipalmated Sandpiper at Prewitt Reservoir, Washington Co., CO, on 1 August 2006. I provide, below, another picture of the wee beastie that shows the upperparts to better effect. 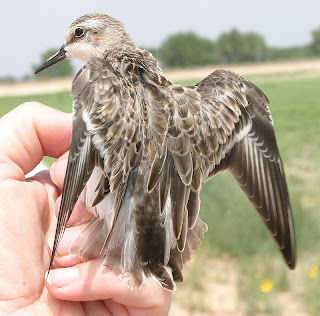