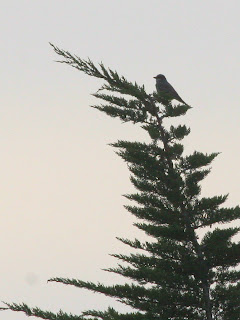 Half of the respondents to this week's quiz submitted the right species, the other half split their answers among eight species, a sure sign that the photo made for a difficult quiz. For a view such as provided in the picture, I find birders tend to identify on impression, which can be amazingly accurate... but which can take a birder quite astray. For such a view, careful study on a feature-by-feature basis may confirm or reject that first impression; perhaps a scope view would serve for confirming such study.

This distant quiz bird is perched in a conifer (of the cedar/cypress/juniper ilk) in somewhat low light, so we'll have to look carefully at it. As noted by most respondents, the bird appears "flycatchery," with its bill not too long, not too short, not too thick, not too thin (apparently, it's juuusstt right), though it could be a large warbler (note the size relative to the conifer parts). Though I can see the following features on the image as is, enlargement makes the various important characters more obvious: gray upperparts that are apparently unmarked, a vague pale wing bar created by pale fringes to one row or another of the coverts, pale fringes to the tertials, a white patch on throat and below eye that is distinctly set off from a vague black mask or eyeline and the rest of the gray head, gray chest of about the same tone as the upperparts, and yellowish on the belly; the poorly-lit tail simply looks dark.

While we might consider a variety of flycatcher options, the kingbirds is really the only group hosting species matching most of these features. Once there, the combination of characters noted reduces our options to one. I took this picture of a Cassin's Kingbird at Goleta, Santa Barbara Co., CA, on 28 February 2009. With the recent re-arrangement of the leader board, our resident Brit, Peter Wilkinson, holds sole possession of first place with 8 of 8 this quarter (and year) that will see 12 quizzes.

Posted by Tony Leukering at 1:00 PM