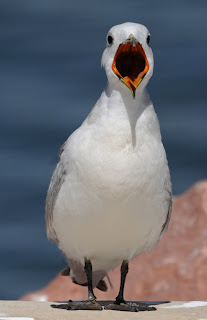 We don't have a lot to go on to winnow the possibilities, but the generally white coloration with, apparently, gray wings, webbed feet, and dark eyes and legs might plop us into the Laridae, home of the gulls and terns. Dark legs are not common in gulls, but relatively so in terns, so let's start there. With the foreshortening of the bill due to the picture angle, determining bill length is problematic. However, bill color is accurately gauged: yellow with a dark tip. That greatly whittles the possibilities among the tern species recorded within the ABA area, as only Least Tern sports such a bill pattern, though Large-billed might at times. However, neither of those species sports black legs, so into the gulls we go.

ABA-area dark-legged gull species include Ivory, Franklin's, Laughing, and Heermann's gulls and, of course, Black-legged Kittiwake. The gray wings of our quiz bird rule out Ivory Gull and the white body does the same for Heermann's Gull. The paleness of the wings and the bill color rule out Franklin's and Laughing gulls. However, it should be noted that even ignoring the black legs, the unmarked white underparts on an immature gull (note the black on the tail) actually rule out nearly all options. Steve Mlodinow took this picture of a 1st-cycle Black-legged Kittiwake -- one of an amazing two present -- at Windsor Lake, Windsor, Weld Co., CO, on 5 May 2011. One of the birds had been present since early April!