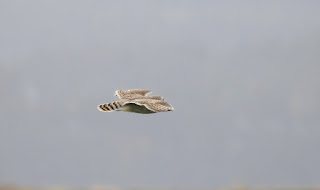 This week's quiz bird has fairly wide-based wings and a wide and distinctly buff-and-black-banded tail; quite an interesting combination. We can also see some vague darkish streaking on the chest that fades into the belly and the whitish vent. The wide-based wings rule out the commonest day-flying ABA-area species with a tail pattern like that, Northern Harrier. As there are no other kites, hawks, etc. with such a tail pattern and such wide-based wings, we'll have to look elsewhere. We don't have to go very far, foraging-style-wise, to get to the owls, which, as a group, tend toward wide-based wings. This bird's tail pattern is not quite right for Burrowing Owl, nor is that contrastingly pale orange-buff patch in the wingtip. Great Horned Owl, which comes in a bewildering array of colors and patterns can also be eliminated on that contrasting wing patch and on the unmarked palenss of the lower belly and vent. The only reasonable options remaining are the two 'eared' owls, a duo that is not known at all well by most birders.

Differentiating Long-eared Owl from Short-eared Owl in flight can be very tricky, but we have some fairly good lighting and a reasonably good view, two features that are not all that common when viewing Asio owls. Both sport the contrasting paler wingtip patch of our quiz bird, but Long-eared is only rarely (if ever) colored this warmly buff, particularly the tail. Long-eared Owls also have darker streaking below that extends farther south, so would be quite visible, given this view. Finally, Long-eared has that wing patch tend more toward rufous than our quiz bird's orange-buff. Steve Mlodinow took this picture of a Short-eared Owl in October 2011 at Port Susan Bay, Snohomish Co., Washington.