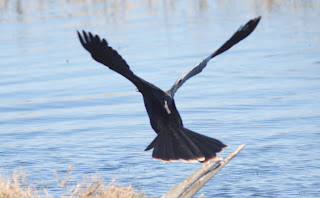 The incorrect responses this week serve to highlight the importance in the ID process that all of us place, consciously or not, on size. The respondents would certainly not have made these mistakes in the field. However, our bird's very long tail is also matched by long wings. Additionally, the tail's pale tip is complete, that is, each rectrix is tipped buffy-white, which rules out one of the species with pale tail tips provided as an incorrect response.

We can also see some whitish on the upper wing coverts and some pale shaft streaks on scapulars and some seemingly oddly-placed streak of white near the back of the wings. That white is on the long, nearly-wispy lower scapulars. Because the picture is not focused, we might ignore the appearance of pale bars on at least one of the central rectrices, but the other one seems to have at least a suggestion of same, so perhaps we might want to consider what it would mean if that appearance were reality. So, a long-winged, long-tailed blackish bird with white on the upper wing coverts, white shaft streaks on the scapulars, pale bars on the central rectrices, and buffy-white-tips to same leaves us with only one option. The picture that I took of the quiz bird immediately prior to the quiz picture is provided below. 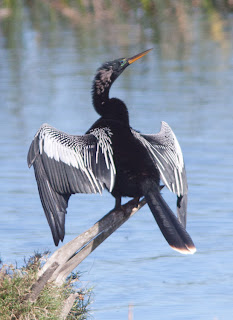 I took these pictures of a male Anhinga at the Viera Wetlands, Brevard Co., FL, on 27 January 2010.

With one quiz down in the final quarter of the year, Marcel Such and Pam Myers are tied for the annual competition with 32 correct responses; Robert McNab is breathing down their necks with 31.