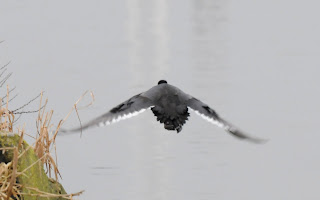 A large (in relation to vegetation) dark bird with a black head; dark gray upperparts; black tail; wide, white trailing edge to secondaries; and feet trailing past tail tip when in flight can really only be a coot. The ABA-area has records for two species, with one being widespread (American) and the other being exceedingly rare (Eurasian). The key characters to separate these two species are all not visible or not discernable with this view: wing chord (a measure of wing length), bill ring (presence or absence), presence of yellowish or reddish tip to frontal shield, eye color, and color of undertail coverts. Unless I am missing something, providing a definitive solution to this quiz is impossible. However, given that the picture was taken at Everett, Snohomish Co., WA (in February 2011 by Steve Mlodinow), we can guess with fair assuredness that it is an American Coot. However, I would have accepted Eurasian Coot as a correct answer, had it been submitted.

Addendum on 18 July: Peter Wilkinson (one of the regular respondents to the CFP Photo Quiz) has written to tell me that Eurasian Coot can probably be ruled out by the extent of white on the trailing edge of the secondaries -- Eurasian's white is much thinner and less noticeable.