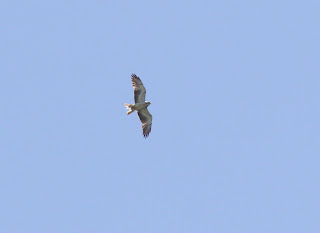 Steve Mlodinow, Steve's girlfriend (sorry, my old mind has forgotten her name), Larry Semo, and I were birding the very flooded Tamarack Ranch SWA, Logan Co., CO, on 19 June 2010 when Steve's girlfriend noted a high-flying raptor circling overhead. Due to the height, intervening trees, and the plumage state of the bird, we had a bit of trouble identifying it immediately, but we eventually all agreed that it was....

Ah, I get ahead of myself.

Raptors soaring lazily overhead are usually considerably easier to ID than are raptors screaming by partially tucked. But, this week's lazily soaring raptor caused our respondents fits, as illustrated by the fact that the correct answer was not the most frequent answer provided - a rare occurrence in the Mr. Bill Mystery Quiz. Our bird's plumage, well, let's just say that it's seen better days. With the date given, things get a bit easier, as a ragged bird at that time of year is almost certainly a first-cycle bird (right around one year old), but the date was not provided for the quiz, so we'll have to go on without that datum.

The dark flight feathers, white underwings, mostly-white body, and black wrist mark leave few options, with all the best ones provided as answers this week: Osprey, Swainson's Hawk, and Short-tailed Hawk. While Prairie Falcon is variable as to its underwing pattern, but they also show at least dark axillars and it and Gyrfalcon never show a distinct dark patch on the greater primary coverts on the underwing. White-tailed Hawk is somewhat of a match for parts of our bird, but as the outer pair of rectrices on both sides of the tail are complete and there is no sign of the distinct black subterminal band typical of adults of that species, adult White-tailed is eliminated; juveniles would never be so pale.

Our bird's 6th primary (p6; count 5 primaries in from the outermost) is considerably and noticeably shorter than is p7, creating a very pointed look to the wingtip for a buteo, so Short-tailed Hawk is ruled out. Osprey sports a wrist patch, not just a comma, with the length of all the greater primary coverts on the underwing being dark, not sporting a terminal bar. Additionally, Osprey does not exhibit the dark of the face extending down to the shoulder and onto the throat as does our quiz bird. Thus, by the process of elimination, our quiz bird is a Swainson's Hawk. Colorado plays host to, well, hosts of such birds in summer, and birders with little experience with them in the field often believe that they're other species, because they just don't look like the pictures in the books! But, our quiz bird is identifiable as a Swainson's Hawk by the various features presented above: dark remiges contrasting with pale wing linings, wrist comma, no carpal bar, pointed wingtip, dark extending from auriculars to sides of throat, and pale tail with vague darker bands.

This week's quiz picture was the fourth consecutive one from northeast Colorado on 19 June, illustrating quite nicely how easy it is to take quiz pictures! With the wreckage caused by this quiz, Tyler Bell, Chuck Carlson, and Joel Such are the only players remaining with perfect scores after five quizzes.

Congratulations to the 6 of 18 getting the quiz correct:
Tyler Bell
Chuck Carlson
Margaret Smith
Margie Joy
Jim Beatty
Joel Such