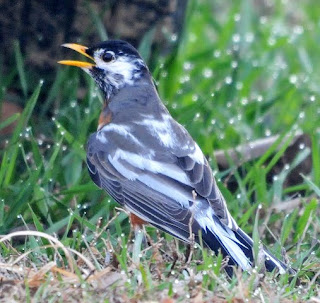 What an odd-looking bird. The extreme patchiness and irregularity of the white bits suggest an abnomality of plumage in this week's quiz bird -- a good time to rely on our understanding of structure and posture! And, of course, the "good" field marks that we can see.

Before heading down the solution road, I want to state that this bird is not an albino, nor is it a "partial albino," which is an impossibility. For a fuller explanation of those terms and others, one might check out the 5 December 2010 post on the Cape May blog (you will have to scroll down to the date).

The bird is standing on the ground with head held a bit above horizontal. What isn't white on the head is black and the medium-length bill is a bright orange-yellow. The upper chest has some rusty or maroon color, as do the feathers on the upper leg. The non-white bits of the upperparts are all gray and what is not white in the tail looks black. The one leg that we can see is an odd, pasty bluish-white color, but the eye that we can see is dark. The bird has a fairly long primary projection (extension of the wingtip beyond the tip of the longest tertial) and the wingtip falls beyond the tips of the uppertail coverts -- so, a fairly long wing, particularly considering that the tail is not short.

The structure and posture point to a thrush of some sort, and the overall coloration (sans the white bits) sends us to the genus Turdus. While the bill looks orange enough to be that of Rufous-backed Robin, that species does not sport our quiz bird's black head or tail, and, obviously, has a rufous back. (As an aside, why did the AOU exempt only this species and American Robin from the recent change from "Robin" to "Thrush?" Rufous-backed Robin is not even the second-most common Turdus in the ABA area! Clay-colored Thrush is and it breeds in the ABA area!) Fieldfare does have a black tail, but also exhibits a gray head and brown back, and lacks rusty on the leg feathers. Redwing has grayish-brown upperparts (including head and tail) and lacks rusty on both the upper breast and the leg feathers.

So, nothing for it but to go with what was probably the obvious answer to most. Steve Mlodinow took this picture of a piebald American Robin at Drake Lake, Boulder Co., CO, in April 2011. I will leave to the reader to determine which form of leucism is expressed in this interesting bird (see cited blog, above).

One response lacked capitalization of "robin" and another included an incorrect guess as to the condition of the bird directly in the answer; both responses were precluded from being considered correct for the competition.

Incorrect species provided as answers:
none