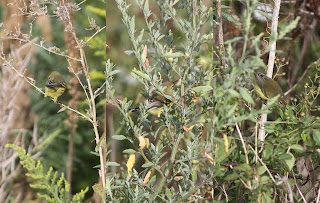 Click on picture(s) for a larger view.
Three views of the same individual

Presumably due to the combination of wing bars, flank streaking, and yellow underparts, all respondents thought that this week's quiz bird was a warbler. The important bits to notice on the wee beastie are:

1) whitish wing bars that are not that prominent (seen best in the right (R) picture, and blown out of proportion in the L picture);
2) blackish flank streaking (L and center (C) pictures);
3) undertail covert color (L);
4) face pattern (C and R); and
5) back color (R).

Palm Warblers do have yellow undertail coverts, but they are at least as bright as the flanks (Yellow Palm Warbler) if not brighter (Western Palm Warbler); they are never duller. Additionally, the color of the flank streaking is incorrect for that species. The greenish back helps rule out Kirtland's, which is also ruled out by the yellow undertail coverts, and blackish flank streaking rules out the only non-Dendroica provided as answers by respondents, Orange-crowned Warbler.

Despite all of the above, the back and face are sufficient unto the day to identify our quiz bird. Though very subtle, the bird's back has a hint of reddish streaking. The face, however, is not as subtle. There are large pale areas above and below the eye and a distinctly darker bottom edge to the auriculars and a dark eyeline behind the eye. Those pale areas around the eye are not thin and well-defined, but broad and blurry. The combination of features presented lead to only one solution, with the final two being definitive individually.

I took these pictures of an immature Prairie Warbler from the hawkwatch platorm at Cape May Point SP, Cape May Co., NJ, on 11 September 2010.