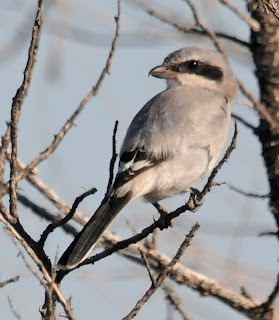 The quiz bird this week is an obvious shrike, but the ID is not particularly obvious. Despite many believing that shrike ID is simple, the extensive variation in appearance among the various subspecies of Loggerhead Shrike and individual variation in both species makes for the odd bird that is not immediately identifiable. As our bird lacks any brown tones to the plumage, we are looking at a non-juvenile shrike, that is, not in juvenal plumage. Because Loggerhead Shrike is such an early breeder, young-of-the-year birds can look quite adult-like as early as August. Without knowing when the quiz picture was taken, we cannot be certain of the age of the bird, because the wing features critical for ageing are not visible, being covered by the scapulars.

While rump and uppertail coverts color (white in Northern vs. gray in some Loggerheads) can be of use in separating the two breeding ABA-area shrike species, most of the critical field characters are on the head.

1) Forehead color: Both species have at least a narrow row of black feathers at the top edge of the bill. In Northern, this can be difficult or impossible to discern in the field; in Loggerhead, the character is variable, but many have extensive black foreheads; such birds are identifiable on that feature, alone. The more important aspect of forehead coloration in the two is that Northern tends toward extensive white separating the black edge (and bill) from the gray crown; in Loggerhead, there is little or no white between black and gray.

2) Distinctness of superciliary: While this feature is variable in both species, nearly all Northerns have much more obvious superciliaries that tend to run uninterrupted from the forehead to the back edge of the auriculars. In Loggerhead, the superciliaries tend to be very thin (though usually well defined) and restricted to in front of the eyes.

3) Width of mask: The mask of Northern Shrike is about the height of the visible portion of the eye, extending below the eye about the same distance at which the eye extends above the mask (see 4, below). Loggerhead masks are distinctly wider than the eye, creeping just over the eye, but still extending well below the eye.

5) Color of base of mandible: Northern Shrike usually has a more-or-less distinct patch of pale (usually yellowish) at the base of the mandible, while, usually, the entire bill of Loggerhead is black.

6) Length of bill: The bill of Northern is sometimes obviously large and some Loggerheads have seemingly obviously small bills, but the feature is variable and assessing this difference really requires extensive study of both species. That is because the absolute difference in size is quite minimal: 13.0-14.3 mm in Northern; 10.5-12.6 mm in Loggerhead, an "average" difference of only about 2.0 mm (less than 1/12th of an inch)! However, Northern tends to have a relatively smaller head, which accentuates the large bill size, while in Loggerhead, the reverse is true. Generally.

Of course, had I provided the month and location of the photograph, I doubt anyone would have missed it. Steve Mlodinow took this picture of an excubitorides Loggerhead Shrike at Crow Valley campground, Pawnee National Grassland, Weld Co., CO, on 20 August 2011, which is about 1.5 months before the earliest of migrant/wintering Northern Shrikes arrive. Though tricky, this bird still exhibits the typical forehead of extensive gray and the wide, eye-including mask of other forms of Loggerhead Shrike, which are the two most-reliable features separating the two shrike species. Steve circulated this picture specifically to point out that some Loggerheads have a pale base to the mandible, though that paleness is even more vague and never well-defined as it often is in Northern Shrike.

One otherwise correct response lacked capitalization, so was precluded from being correct for the competition.

With the devastation of the leader board caused by this quiz, Ben Coulter, Su Snyder, and Peter Wilkinson emerged as the only players with perfect 3-of-3 scores for the quarterly competition.