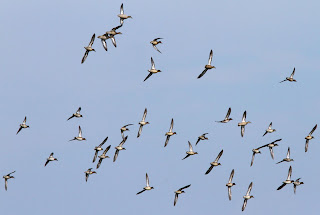 Ah, ducks. Quite the interesting group, ducks. Also, quite the interesting responses birders have to them. Most of the adult males in breeding dress swimming on a pond in close range don't scare folks, but any other situation causes many of us consternation. However, ducks exhibit a plethora of characters useful in field ID, if we just know what bits to ogle.

Here, we have some 36 ducks overhead and turning away -- definitely a view to which many birders would object if we insisted on them IDing the birds. There are darned few really "pretty" ones and we cannot see the upperparts. Underwing patterns are exceedingly useful at identifying ducks in flight, and these ducks are no exception. All of them sport dark leading edges, white centers, and gray trailing edges, with dark wingtips. Amazingly, this single character gets us down to just American Wigeon, the "blue-winged teal" (Blue-winged and Cinnamon teal, Northern Shoveler, and Garganey), and Green-winged Teal. Of the 36 birds, six of them provide a good starting point at IDing the rest, and these are all indicated by white arrows in the below picture. 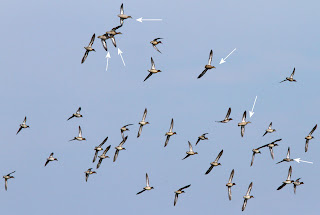 Though some of these six aren't as clearly depicted as others, the top four present an excellent chance to specifically ID some of these beasties. Their heads are brown with white feathering at the base of the bill, and with black bills. These are Blue-winged Teal. The white on the face helps us rule out Cinnamon and none of them really sport the large, spatulate bills typical of Cinnamon Teal. And if their bills aren't big enough to be those of Cinnamon Teal, they sure aren't big enough to be those of Northern Shovelers. The bill color rules out Green-winged Teal that aren't adult males in breeding colors and the white in the face rules out breeding-condition males.

With that decision made, we can then make the next one: that the ducks are all small ducks, as there really aren't any that look any larger than the Blue-winged Teal. Certainly, some look a bit larger, some a bit smaller, but much of that is due to differing distances from the camera. For the rest of the birds on which we can see the forehead reasonably well, they all seem to sport steep foreheads with a fairly sharp angle from crown to forehead. That should rule out all of the "blue-winged teal," as those species typically show a more sloped forehead, lacking a strong crown-forehead angle (like our four top Blue-winged Teal). And now, we get to the focus of the quiz. The underwing patterns in Blue-winged and Green-winged Teal are similar, certainly, but they also differ in a consistent fashion. The white on Green-winged Teal is thinner and contrasts more strongly with the dark secondaries. Additionally, most Blue-winged Teal have the white extend into the greater primary coverts, where it contrasts with the dark lesser primary coverts; all of a Green-winged Teal's primary coverts are gray. For those keeping count, that makes six Blue-winged Teal and 30 Green-winged Teal in this picture that I took at Cape May Point SP, Cape May Co., NJ, on 17 September 2010.

Two respondents this week submitted no incorrect species, but did not provide enough correct ones. As for the four responses providing American Wigeon as one of the species present, I am guessing that the bird just left of the bottom-right-most bird is the one that was confused. Though it looks a fair bit larger than the bird to its right, I suspect that it's a bit closer to the camera than is that other bird. Additionally, the appearance of that bird -- brown sides, contrasting with white belly -- is matched by other individals present that are not apparently larger.