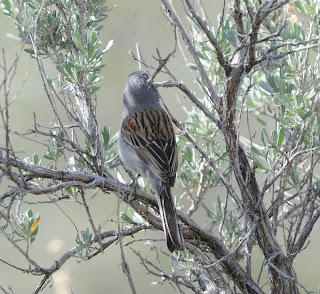 Ah, some field marks! The quiz bird, perched in a sage, appears to have a gray head and body -- at least, what we can see of either. It also sports a heavily-striped back; fringed wing coverts; a long, thin tail; and what appear to be dark legs. As noted by many respondents, the only real options from a first-glance perspective seem to be Black-chinned, Sage, Black-throated, and Five-striped sparrows. Black-throated and Five-striped are easily ruled out by our bird's streaked back. While the Pacific-coastal forms of Sage Sparrow lack streaked backs, the interior forms sport them. However, they are not usually this streaky. Additionally, what we can see of the rump/uppertail coverts area is quite gray, rather than the sandy- to medium brown of Sage Sparrow.

That should leave us with just Black-chinned Sparrow, but what about the dark legs? Both The Sibley Guide and the 6th-edition National Geographic guide illustrate the species with fairly bright pink legs, which is a common feature of sparrows. In fact, one of the primary reasons that I might have considered Sage and Black-throated sparrows is because they are two of the few sparrow species with dark legs. Looking through many pictures of Black-chinned Sparrow on Flickr shows that leg color varies in the species from bright pink to nearly blackish. I could not discern any seasonal reason for this, but my searching was fairly brief. Just to be certain, our bird also sports rufous-fringed outer scapulars that, while not unique in sparrows, are almost non-existent in the grayer species.

This adult Black-chinned Sparrow was photographed by Rachel Hopper on 22 April 2011 at Colorado National Monument, Mesa Co., CO. This singing, territorial individual accounted for only the third accepted record for the state, though there had been a previous almost-certainly-valid report of the species from the Monument - of a bird heard singing, but not seen -- that would have been the state's first if accepted.