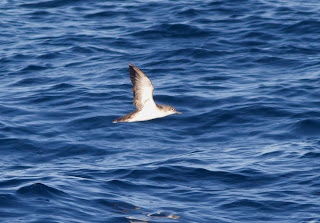 This week's quiz and the following week's are of quite similar birds and knowing which ocean in which the photographs were taken would help tremendously. Unfortunately, that minor detail was not noted in the caveat, though we at least have an approximate date. This quiz bird is one of the black-and-white shearwaters that can cause even very-skilled birders to pull their hair out. Again, knowing which ocean we're on would help tremendously. However, that datum is not necessary, because there's enough visible to make a definitive ID.

While a number of plumage features can help us ID the quiz bird, the approximate date was provided because the bird is obviously in the closing stages of wing molt and, with the availability of Steve Howell's tour de force book on the Procellariiformes of North America, wing-molt timing is available to birders for use in tubenose ID. The bird's outermost two primaries are the only primaries that have not been replaced or dropped. We can also see that the middle secondaries have been replaced, but the important aspect of the molt is its timing. Manx Shearwater, which has blacker upperparts, crisper delineation between dark and light areas, bright white undertail coverts, and little or no white above or in front of the eyes does not begin primary molt until September, so would not have gotten anywhere near this far along by late September -- wing molt is a long, involved process for seabirds.

With Manx out of the running, we are left with two species that are extremely similar, yet still relatively easy to ID, because, in the ABA area, they occupy differing oceans! However, since that datum was not provided, we'll have to work out whether this is a Black-vented Shearwater or an Audubon's Shearwater. Both species are relatively dingy, with diffuse meeting of dark and light. Both species tend toward brown, rather than black, upperparts plumage, and both have dusky undertail coverts. And, alas, the two species have similar molt timing. Finally, both species show a dark bar of variable extent  on the underside of the wing extending from the base of the tertials diagonally toward the middle of the patagium, though this is usually much more extensive on Black-vented than it is on Audubon's (with our bird's feature suggesting the former). However, there is an excellent and little-used field mark that can separate the two. On Audubon's Shearwater, the white of the lower face extends up in front of the eye and abuts the top of the base of the bill, while on Black-vented, the upper base of the bill is met solely by dark coloration. Though the particulars of this character can be a bit difficult to assess well on a rocking boat, the feature provides each species with a fairly distinctive facial appearance that would be quite useful in determining whether one needed to look very carefully at a bird on the "wrong" ocean!

I took this picture of an adult Black-vented Shearwater on 8 October 2011 off San Diego, San Diego Co., CA. Yes, for those that can add and subtract in their heads, I screwed up on the approximate date, and I don't recall how I managed that! It should have been within 14 days of 25 September. Ah, well, it doesn't really matter, those few days. Finally, I note that very few took an official stab at this quiz bird's ID, and West-Coast birders seemed to have an advantage, because the majority of them got it right, while most respondents did not.