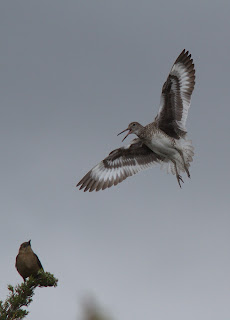 Click on picture(s) for a larger view.
The picture was taken in June in both species' breeding habitat.

The true take-home message for me concerning this quiz photo was that respondents did not make full use of the hint/caveat. If you are coming to this quiz blind, you might want to ponder that red-text note carefully.

Our quiz's focus bird is yelling about something, perhaps the bird on the tree on which it's about to land. What? A shorebird landing in a tree? Certainly, some species do it quite a bit, such as the species in question, though generally only during the breeding season and when on territory. Many of us have seen those pictures of Hudsonian Godwits standing on the tops of Black Spruces in their breeding haunts (and if you're like me, have been really keen to see such for yourself!), so we might consider that species; the tree IS a conifer! Our bird also certainly has black wing linings. However, Hudwits lack our bird's dusky-tipped white tail and the second white band on the underside of the wing. That leaves us with only Willet as an option, and all of the other features visible are consistent with that ID.

Now, we just have to solve the second bird. The combo of cinnamon coloration below and blackish wings does not leave us many options, particularly with that longish dark bill and that we know that the picture was taken in June (see caveat, above). That means that this must be a female of one of what I call the "big boy" grackles, Boat-tailed and Great-tailed. Yes, even female Rusty Blackbirds are never this uniformly cinnamon, and they certainly are not so in June. On breeding habitat.  They are black.  Or blackish.

Knowing the other species is a Willet might give us cause to think that the solution is easy, but Willet breeds next to both species of large grackle over its odd range. But, that range is the important factor here, as the Atlantic and Gulf Coast breeders (the ones that share range with Boat-tailed Grackle) are referable to what is termed "Eastern Willet," while those in the western part of North America (and which breed in places that also support Great-tailed Grackle), are "Western Willets." They are currently considered subspecies of one species, but they have obviously traversed quite some distance down the road to species differentiation, as they are readily separable on voice, plumage, and size cues. So, all we have to do to ID the grackle is determine to which subspecies the Willet belongs.

I took this picture of a complaining (Eastern) Willet and a female Boat-tailed Grackle near Rio Grande, Cape May Co., NJ, on 5 June 2012. One respondent's otherwise incorrect answer had Willet mis-spelled and another's included "Eastern" in the species' name, which is incorrect.

With three quizzes to go in the quarterly competition, four are tied at the top of the leader board with nine correct: Ben Coulter, Richard Jeffers, Robert McNab, and Sean Walters.