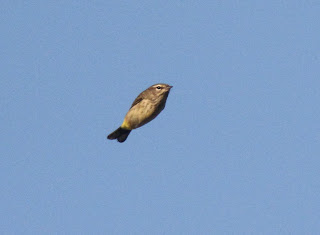 Bryan Guarente provided his tack to IDing this week's quiz bird, so we'll start there.

"We have a small passerine. It's got a dark beak, slightly darker streaking on paler underparts, yellow undertail coverts, a light supercilium and lower eye arc, and a notched tail. With only the yellow undertail coverts compared to the grayish overall body, and knowing the size, we are left with five species: Palm Warbler, Colima Warbler, Virginia's Warbler, Nashville Warbler, and Orange-crowned Warbler. Using the facial patterns, there are only two options left: Palm and Orange-crowned. From here the shape of the facial markings can be the biggest indicator. On our quiz bird, the supercilium goes well past the eye and back down the face. Palm Warbler is the only one of our two left that has this shape, so we have found our answer.

"Now, I am sure that Tony will go to the subspecies level with this bird, but I just don't have enough experience with the two subspecies to be able to do that, so I will let him tell us."

Thanks, Bryan. I want to point out an even stronger clue to separate these two species, but first, a little biogeography. All the folks that provided Orange-crowned as their answer live in the West, where that species is about the third-most-common warbler migrant. In the East, Orange-crowned is amazingly scarce as a migrant on the ground for a species with such a vast breeding range in eastern Canada. Now, one of the best clues for discerning Dendroica warblers from almost all other parulids is the presence of tail spots. Yes, some non-Dendroicas sport them (e.g., the "winged" warblers, Prothonotary, Hooded), but those tail spots are an excellent first decision point. This week's quiz bird sports large whitish tail spots on the outermost rectrices and, in fact, the shape, size, and placement of them would be all we would need to identify our wee beastie to species!

As Bryan guessed, we can go further than the species level with this one. There are two subspecies of Palm Warbler, nominate palmarum (Western) and eastern chryseola (Yellow). In Western Palm Warbler, the undertail coverts contrast (weakly in alternate plumage, strongly in basic plumage) with the color of the chest; in Yellow Palm Warbler, nearly the whole of the underparts are bright yellow. I took this picture of a Western Palm Warbler in 'morning flight' over my house in Villas, Cape May Co., NJ, on 15 September 2010. It was one of some 425 that I counted/estimated going by in just one hour -- the species was the most common bird in/over/past my yard that day!