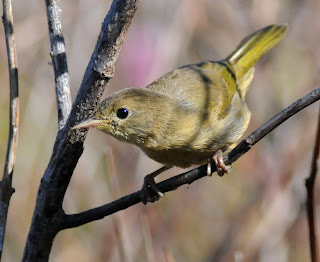 A relatively drab bird, and one that is apparently small (considering the comparison to the vegetation), is this week's quiz subject. The only strong bits of not-brownish coloration that we can see are in the tail and the wings, which is actually a solid clue about one aspect of the beast. The color in the tail on such a small bird leaves us only a few families to play with for the ID of the bird. Since we can see the bases of the secondaries and there is no dark bar there, we can rule out the kinglets (of course, the pink legs had already done for them) and Yellow-browed Warbler. The lack of a whitish lower wing bar and the bright yellow-green tail rules out Arctic Warbler (as do a few other features). These excisions from our possible solution set should leave us with just New World warblers and orioles, but we can scratch the latter, as any oriole even close to this small has obvious wing bars (our bird has only the barest suggestion of a tan lower wing bar).

Once among the New World warblers, we can eliminate whole scads of species on our bird's lack of wing bars. If we could see the lower part of the inner webs of one or more of the outer two to three pairs of rectrices, we would know whether the quiz bird has tail spots or not, which would help us tremendously. Unfortunately, the only rectrices of which we can see inner webs are the middle ones on the bird's left side; the outermost ones are stacked under those. However, those tail-spot-less middle rectrices do the job of ruling out the species with tail spots on those feathers that we might have considered, particularly Yellow and Hooded.

The bird's lack of any bright plumage on the head, back, chest, sides, and flanks should give us pause. Taking a closer look, we can see that there a few, scattered scapulars or wing coverts that appear to be colored like the secondaries, but most are dull tannish-brown. Hmm. So, the bird must be molting in a brighter set of feathers, so the bird must be either a very worn adult or a recent fledgling. Looking at individual dull feathers in that same region, we can see that the feathers are not tightly barbed, but very loose, with long, stringy filaments at their tips. This is a feature typical of juvenal (=first basic) plumage in many species, particularly passerines.

Aha! That could certainly explain the dull coloration, coloration that really fits nothing in the various guides, because, juvenal plumage is given exceedingly short shrift in most field guides, at least of passerines. At this point, it might be politic of me to remind readers that warblers in first basic (=juvenal) plumage have the flight feathers (primaries, secondaries, rectrices) that they're going to wear for nearly a year and which sport adult-like colors and patterns. Thus, we are able to use these feathers to determine the identity of our quiz bird.

Because of the color of the flight feathers that we can see, we may have reduced our solution set to those mostly unpatterned yellowy-green species, such as (in no particular order) MacGillivray's, Mourning, Kentucky, Connecticut, Wilson's, Orange-crowned, and Nashville warblers, and Gray-crowned and Common yellowthroats. Though we might have considered Tennessee, that species sports very thin bills and, as youngsters, has bright lemony wing bars. Bill shape rules out Gray-crowned Yellowthroat (too thin), Wilson's Warbler (too long and thick), and Orange-crowned and Nashville warblers (too thick and blunt).

Though we may think that we have nowhere to go from here, short of having a field guide that included all of those ephemeral passerine juvenal plumages, we actually have two good clues. The first one is that the tail looks fairly long, which, if true, would rule out all but one species left in our possible solution set. The other is absolute, but unknown by most birders because it's not a field mark that one is going to be able to use in the field all that often. However, thanks to the superb photograph by Steve Mlodinow (taken in western Washington in July 2010), we can actually discern that the bird has no rictal bristles, and only one regularly occurring ABA-area parulid meets that criterion and, most wonderfully, the species suggested is also the one suggested by our bird's long tail. (Rictal bristles are modified feathers at the base of the bill that lack barbs and are generally considered to assist with capture of small, mobile prey in the air; they are obvious on aerialist avian predators and shorter and less-obvious on species that do little fly-catching; on this Black Phoebe, note the bristles sticking out both above and below the bill.)

I provide, below, another picture of the same individual showing the incoming patch of yellow feathers on the chest of this young Common Yellowthroat molting into formative plumage. Though a majority of respondents submitted incorrect answers, a plurality got this quiz correct. After two difficult quizzes, only five respondents sit atop this quarter's leader board with perfect scores:  Richard Jeffers, Margie Joy, Pam Myers, Su Snyder, and Peter Wilkinson. 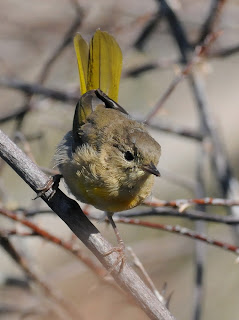