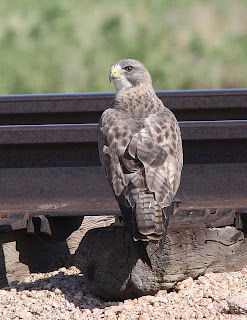 A raptor perched on the ground right next to a railroad track is this week's quiz bird. We cannot see the bird's underparts, which probably threw off all of those getting the incorrect answer. But, we don't really need them, if we pay close attention to the field marks on the upperparts, and one very useful one on the underparts, that we can see.

Peter Wilkinson, who got the correct answer, wondered if I was trying to make quiz takers think of falcons, due to our bird's long wings, which extend beyond the tail tip. My answer is, "not consciously," but that was one feature that I was going to expouse upon. It does have long wings and the visible primaries are quite black, contrasting strongly with the rest of the wing that is visible. With a view from above of this bird in flight, we would see a fairly distinctly bicolored wing, dark hand and browner arm. Also note that the bird has at least two ages of secondaries, thus it is not a juvenile. The age is relevant, as the tail pattern means a bit more since most juvenile raptors that might be confused with our quiz bird have banded tails, but don't as adults.

The large falcons generally have tapered tails inconsistent with the quiz bird's. The deck feathers (yes, Peter, the raptor community on this side of the Pond does use the term) -- the central rectrices -- are broad and rounded on our bird, another feature at least somewhat inconsistent with a falcon ID. The strong pale fringes to all of the upperparts feathers should rule out all of the kites that might be considered.

With the above, we'll probably have to look among the buteos for a solution. With that, the face pattern becomes quite critical. Only two buteos typically show such well demarcated white foreheads and chin/throat: Short-tailed and Swainson's. Our bird is really too patterned above for Short-tailed and, despite the species' namesake, the short wings still don't protrude beyond the tail tip. Additionally, raise your hands all who have actually seen a perched Short-tailed Hawk! I haven't, though, of course, they do partake of that activity. I took this picture of an adult Swainson's Hawk along Hwy 138 in Logan Co., CO, on 19 June 2010.

One respondent neglected the possessive aspect of the species' name, so the answer was precluded from being correct for the competition. Three pictures into the new quarter, there are seven tied at the head of the class with perfect scores.