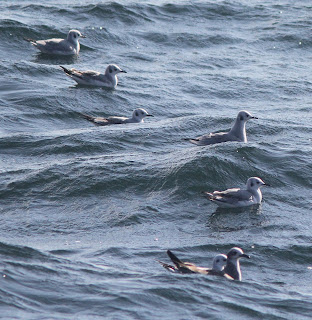 No ABA code 3 species (or rarer) in picture

Answer by Marcel and Joel Such and Tony Leukering

The brothers Such provided good solutions, so I'm running with 'em. I find the slightly different tacks they took to get the correct solution interesting and beneficial, particularly as they cover slightly different bases and do my job for me, and well. The first responding of them this week was Marcel, so take it away!

"To start off this quiz, we should immediately note that there are nothing but gulls in the photo, and with the hint that 'No ABA code 3 species (or rarer) in picture,' we can directly limit ourselves to just 19 species. As with the last quiz, we’ll check to see how many species are present. All of the birds, minus the bird in the immediate foreground of the photo, all share distinctive black “ear-muffs,” thin black bill, and tiny white tips on their otherwise black primaries, so I feel confident that these are all of one species. The closest bird, however, is obviously different, being distinctly larger, with a dark gray back; partial dark hood; and thick, slightly drooping, dark bill.

"For the species-specific identification, let us start with the smaller, more abundant, gulls. Of the 19 sub-code 3 species, only three species have the obvious dark ear-muffs, Black-legged Kittiwake, Red-legged Kittiwake, and Bonaparte’s Gull. Of these, only one species has a thin, black bill, Bonaparte’s. The kittiwakes all have thicker, shorter bills of a bright yellow hue.

"For the second species, only three options, Franklin’s, Laughing, and Sabine’s, have the distinctive dark partial hood shown by our bird. From here, Sabine’s can be quickly eliminated because of its comparatively shorter, thinner bill, with a distinct yellow tip. Franklin’s can also be eliminated by its thinner, straighter bill and its white nape (our bird’s is gray). This leaves us with Laughing Gull, which matches our bird exactly."

And now for Joel:

"Comparing all the birds in this photo, it looks like there are two species, obviously gulls. There are six small hooded gulls and one medium-sized hooded gull in winter [basic or formative, depending upon age] plumage.

"The small hooded gulls: All the gulls except for the bigger browner gull in front are small hooded gulls. Field marks on these non-breeding-plumaged birds are dark ear spot; thin, black bill; somewhat-light gray back; and dark primaries. They cannot be Little Gulls, due to the lack of a dark cap. Black-headed Gull can be eliminated, as they lack the heavier red or orange bill. Bonaparte’s Gull, on the other hand, is a perfect fit, matching all the other field marks that are present on the six small hooded gulls in the quiz photo. Other considered birds are both Kittiwakes, which don’t have the right bill or the correct head pattern.

"The medium-sized hooded gull: The gull in the front is obviously of a different species than all the others gulls, being either a Franklin’s Gull or a Laughing Gull. The brown wings and gray hindneck with a dull half hood make it a first-winter bird. It’s not a Franklin’s Gull, which has a whitish hindneck and a more distinctive hood, leaving Laughing Gull as our winner, with its rather heavy, long, slightly drooped dark bill; white forehead and throat; dark auriculars and neck; and brownish wings."

Because they weren't quite specific enough about a couple bits, I'll finish things up. Black-legged Kittiwakes as juveniles have black bills, but in that plumage they also sport that whacking big nuchal collar. While Red-legged Kittiwakes lack that collar as juvs, they also have very tiny bills and very large eyes (relative to head size), which our quiz birds lack. I believe that Joel is right and the Laughing Gull is a first-winter (in formative plumage), but the Bonaparte's are a mix of two ages (readily told by the black in the wing coverts), with two adults, three first-winters, and one of undetermined age present.

I took this picture of six Bonaparte's Gulls and one Laughing Gull off Delaware on 23 November 2010. They were part of a HUGE feeding frenzy including some 1500-2000 Bonaparte's Gulls, 300 Laughing Gulls, 30+ Black-legged Kittiwakes, 20+ Great Shearwaters, a few Manx Shearwaters, and 9+ Parasitic Jaegers (with a few big gulls and a smattering of Northern Gannets thrown into the mix, too). The system works like this: It starts with a big school of baitfish (e.g., Sand Eels [Ammodytes sp.] or Anchovies; this time, Sand Eels, I think -- "Rock me, Ammodytes!") and the big schooling predatory fish, in this case Bluefish and Striped Bass, attack them from below, forcing them to the water's surface. At this point, the gulls and shearwaters can get 'em and start gorging. The final bit is the jaegers pirating the gulls' and shearwaters' free lunches from them.

Two of the three respondents providing only one species in their answers got that one species correct (Bonaparte's).