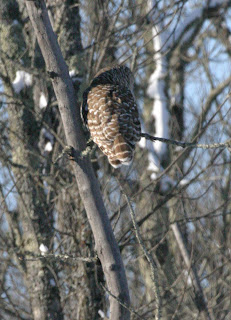 All respondents got to the genus Strix this week, which is a good thing, as that is correct. Once there, we can eliminate Great Gray Owl from consideration, as that species does not sport such obvious white banding on the tail, among other reasons. That leaves us with a pair of species that, until recently, had nearly allopatric ranges (that is, the ranges don't meet). However, Barred Owl has colonized cut-over areas in the Pacific Northwest bringing it into contact with Spotted Owl and, in addition to creating a bit of an ID problem, has initiated hybridization between the two, creating a definite ID quandary. However, this individual is well within one of the species' camps, with its gray face; extensive white tipping to head, back, and scapular feathers; and overall medium brown coloration.

I took this picture of a Barred Owl in the Sax-Zim Bog area of northern Minnesota on 16 January 2005. As noted by Sean Walters, the extensive non-aspen-and-non-cottonwood deciduous-tree habitat in the picture is quite rare within the range of Spotted Owl, particularly in places where snow is extensive.