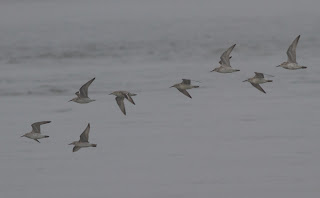 All eight of this week's quiz birds are of very similar size and shape, so they must be of the same species or of incredibly similar species if there are multiple species present. Of course, since these are shorebirds, we know that there are certainly sets of very similar species, particularly in the small Calidris sandpipers (Semipalmated/Western/Red-necked/Little and White-rumped/Baird's). We could spend hours studying the picture and I could spend hours discoursing on why this species or that species is not included in this picture, but I think that I will take Sean Walters' tack to the correct answer. Sean wrote

Good for you, Sean, particularly as that was the very reason that I used this photo, as all similar species have extensive amounts of white on the underwing. All eight birds are showing, to greater or lesser extent, their underwings, making the ID straightforward. I took this picture of Red Knots on 26 September 2011 at Stone Harbor Point, Cape May Co., NJ. Note: multiple respondents provided answers including more than one species, hence the disconnect between numbers of respondents and numbers of answers.