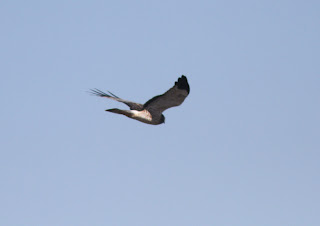 [I apologize for the tardiness in getting the recent solutions posted, but I am currently working in Texas away from Internet access, so I'm getting to them as I can.]

This week's quiz was unanimously thought to be a raptor, perhaps at least in part due to the apparently hooked bill. With our bird's dipped-in-ink wingtips, pale underwings and underparts, and longish tail, we have few choices that fit. Swainson's Hawk might be considered, but adults have the secondaries entirely dark below, while youngsters -- which have less-black secondaries -- sport blackish streaking on the underparts, not reddish barring. Ferruginous Hawk might offer a safe haven, the bird does appear to have a wrist comma, but there is just too much black in the primaries and secondaries. The wings are too long and narrow for any accipiter.

In fact, the black wingtip is well outside the pattern for all but one ABA-area species: Northern Harrier. That black wingtip also allows us to sex the bird as a male and age it as an adult, as females and all juveniles lack black wingtips. While some/many/most might think that the reddish barring and apparently brownish inner wing on the top side may suggest immaturity, I am not convinced. Virtually every time that I get really good looks at black-wing-tipped harriers, they show at least some barring underneath and some brown on the back. So, unless I am being followed around by second-year male Northern Harriers, I suspect that most fully adult males show some of this. I agree that it may well be likely that younger males are more likely to show such markings and to show them more extensively, but I feel that Northern Harrier is quite different from what is considered by the AOU to be the Old World subspecies and called by Brits, Hen Harrier, adult males of which are generally clean white underneath and clean gray above.

One correct respondent's answer included a guess as to sex directly in the answer. Had that guess been incorrect, I would have had to have marked the response as incorrect (please read the rules). I took this picture of an adult male Northern Harrier at Cape May Point S. P., Cape May Co., NJ, on 22 October 2010.