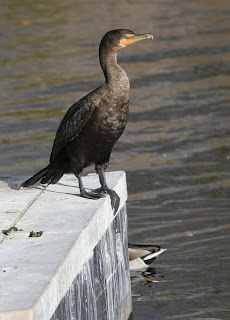 This week's quiz photo included a large, well-lit image of an obvious cormorant. What is wrong with me? Actually, despite the high-quality of the cormorant's image, this photo has two ways to trip up respondents, with both of those coming into play this week.

The first tricky bit is determining which species of cormorant of the two possibilities, Neotropic and Double-crested, is represented by our focal bird. You see, it's got something of a mix of characters, sporting both a bright orange supraloral stripe (a typical Double-crested feature) and a white edge to the posterior of the gular area (a typical Neotropic character). I noted in an article in Colorado Birds that some Neotropic Cormorants have some orange in the supraloral area, so the presence of orange there is not a sure indicator of an ID as Double-crested, though it is a very helpful ID feature. Our bird's orange supraloral seems too extensive and too obvious to be that of the odd Neotrop.

As noted in a previous Mr. Bill quiz (#363), young Double-cresteds can show a white rear border to the gular area, but that the shape differs between the two species. Neotropic Cormorant has the rear border of the gular area angled forward both above and below the gape, creating an angle of less than 90 degrees. Double-crested, however, has the border below the gape nearly vertical, creating an angle greater than 90 degrees. This week's cormorant has that larger angle.

Some might be thinking evil 'hybrid' thoughts, but the various size and shape characters apparent on this cormorant all point to an ID of Double-crested: the large (both long and thick) bill, the large head, and the short tail.

Now, for the second tricky bit. Note that when writing (above) about the focal bird of this quiz, that I never called it "the quiz bird." That is because there are two birds -- well, a bird and a half -- in the picture, and both are certainly identifiable. The second bird is that swimming duck, with white tail, black butt, orange legs, gray tertials, white belly, and curled black uppertail coverts -- an obvious male Mallard.

Finally, the age of the cormorant: though some respondents called this bird a juvenile, it is older than that, as evidenced by the mix of blackish and brown feathers on the underparts and the complete lack of any real whitish color there. I suspect that this is a second-cycle bird (about 1.5 years old), but I know that I took the picture at Prospect Lake, Wheatridge Greenbelt, Jefferson Co., CO, on 6 November 2006, a time of year when juvenile Double-crested Cormorants would still sport lots of whitish plumage on the underparts.

Eight respondents provided only one species in their answers, six of those getting the correct species of cormorant, though one of those omitted capitalization of the 'cormorant.' Additionally, one correct respondent neglected to capitalize 'Mallard,' so that answer was precluded from being correct for the competition. Finally, multiple respondents included a guess as to the age of one of the birds directly with the species name; since those age estimations were incorrect, the answers were considered incorrect (though these respondents also provided only one species in their answers) -- PLEASE READ THE RULES.

Seven players are tied with perfect scores (4 of 4) at this point, about a third the way through the quarter's competition.