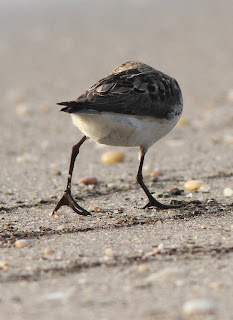 Click on picture(s) for a larger view.
Picture taken in August

Ah, peeps, aren't they grand! Those providing Sanderling as answer (5 of 14 incorrect answers) hopefully just didn't note that our quiz bird has a hind toe on each foot. Another five incorrect respondents did not note that the bird shows partial webbing in that nicely photographed left foot. The four toes/foot and the partial webbing on a peep leaves us only two options: Semipalmated and Western sandpipers.

The above means that 12 of 22 respondents got to the correct set of two species, at which point, the quiz gets really difficult, because we cannot see the bill, which often provides our best ID clue. I provided the month in which the photograph was taken in order to ensure that folks were considering adult peeps in the beginning of pre-basic mnolt, rather than birds nearing the end of pre-alternate molt. Our bird has obviously started its pre-basic molt, and has grown in a smattering of basic scapulars to replace the dark alternate scaps. Taking a critical look at the remaining alternate scaps, I cannot find a single feather with a rufous fringe. Oh, there are some scaps with worn warm brown fringes, but none with rufous fringes, as would be shown by Western Sandpiper. Even more importantly, none show a rufous base, which is even more critical.

Molt timing is of immense assistance in sorting between Western and Semipalmated sandpipers, but age also plays a part in molt timing, so we need to be very careful of using molt timing willy-nilly to ID individuals of this duo. Pyle (2008) states that timing of the pre-basic molt of fully adult (>2 yrs old) Semis is "August-Nov/Jan" while that of 2nd-year birds is "May-Nov in non-breeding birds." O'Brien et al. (2006) depict a molting adult Semipalmated Sandpiper in July (picture 11) that is fairly similar to our quiz bird.

I used this picture in the Mr. Bill Mystery Quiz to drive home one of my most harped-upon messages: "One-character IDs are suspect; check everything that you can." Yes, many aspects of this bird's plumage is similar to that of Sanderling, but that species lacks hind toes. Yes, White-rumped Sandpiper is known to have streaks on the flank, but so do other peeps, and White-rumpeds lack webbing between their toes. Thus, studying this quiz bird's foot right off the bat -- and the posture should nearly force our eyes to at least look at that left foot -- would have gotten us down to two species (assuming that one eliminates Willet and a few other species on size/structure) and bypassed the problems of misconstruing flank streaking and overall appearance.

I took this picture of a molting adult Semipalmated Sandpiper in my back yard in Villas, Cape May Co., NJ, on 17 August 2010. Due to the extreme difficulty of this quiz picture, I have given all those providing 'Western Sandpiper' as an answer a bonus point for getting to the right pair of species, though have counted their answers as incorrect for the competition.