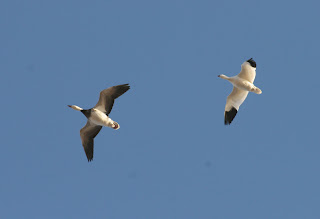 This week's quiz birds' white heads, necks, and bellies rule out all but the two species of 'white geese,' once one decides that they are, indeed, geese. The left bird has the dark chest, secondaries, and tail of a dark morph (aka blue morph) that in Snow Goose was once considered a separate species, Blue Goose. However, in this view, Blue Goose should have any white restricted to the chin, wing linings, and vent, so what's up? Though the differences between white morphs and dark morphs in Snow Goose is genetically based and mostly yea or nay, there is obviously some intermediacy in the system, as birds with this appearance are not all that rare. In Ross's Goose, as far as we know -- though dark morphs are quite rare, there is no intermediacy. Dark morph Ross's Geese do sport whitish bellies, but white on the head and neck is more restricted than it is in Snow Geese.

So, where to from here? What is that semi-dark-morph bird? Perhaps, comparison to the white one would help. The white one seems to have a smaller head and a much smaller bill and a shorter neck. Hmm, that sounds like a Ross's Goose. And that's what it is. Ross's Goose always looks to me quite unbalanced, with that tiny head and short neck seeming a last-minute addition in its design once most of the available parts for construction had been used on other projects.

With that ID made, the dark bird suddenly becomes much easier to figure, as its larger overall size, larger head and bill, and longer neck should produce an ID of Snow Goose. These two birds were part of a larger flock of Snow and Ross's geese that flew over my head while I was helping out on the John Martin Reservoir CBC, Bent Co., CO, on 16 December 2008.

Two respondents provided only one species name in their answers, both missing Ross's Goose. Additionally, one of those answers submitted 'Snow Geese,' which is not the species name. Please note that the requirements of the quiz ask for the species' name. Amazingly, no one stumbled on the punctuation of the right bird's species name. 'Correct' English style should omit the apostrophe-following 's' in words ending with 's,' but the American Ornithologists' Union's nomenclature committee decided to include them for some reason.

Incorrect species provided as answers:
none