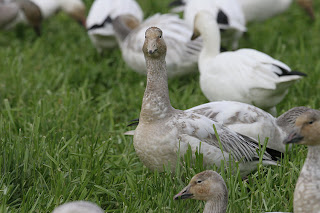 Click on picture(s) for a larger view.
The picture was taken in February.


White geese and not-so-white geese, that is the question. Whether 'tis nobler in the field to suffer the slings and arrows of the lack of Ross's Goose from ones state/province/county/yard list or to take pen in hand and tick it off, and by so marking, end them.

With apologies to The Bard, we begin this week's attempt to avoid the slings and arrows of the CFO Photo Quiz by choosing yea or nay on the presence of Ross's Goose in this field (and it was truly a field) of Snow Geese. The very first thing to recall is that juvenile Snow Geese are easy, as long as one has ruled out hybrid geese and youngster Greater White-fronteds. That is because juvenile Ross's Geese are nearly all white, with just some darker smudgy bits here and there. The bird so comically looking into the camera is a first-year Snow Goose with most of its juvenal plumage intact -- it is basically brownish-gray (or grayish-brown, if you prefer), with those fancy, long, black-bordered, white scapulars hanging down. Most of the other geese in the picture are also first-cycle Snows in various states of transition from juvenal to adult-like colors. We can even see the large grin patch (the dark flattened oval at the meeting of mandible and maxilla) on the beak on the head sticking into the bottom of the frame, which is a key feature in differentiating Snow and Ross's geese. Since all but one of the truly white geese are completely facing away and out of focus -- and are, thus, unreliably identified, we should probably concentrate our hopes and dreams for our state/province/county/yard list on the adult white goose in the right of the frame. It is only mostly facing away, but, perhaps, something might be done with the bird's bill to give us a clue; it certainly looks at least somewhat smaller than the young Snow Geese between it and us. The angle, though, may preclude any confidence in assigning a name to the beast, as it is really impossible to be certain of the bird's bill's shape, though it does look a bit long and slender to be the bill of a Ross's Goose. In the end, unless provided a better view, we are better off leaving it as unidentified, even if we assume that it is a Snow Goose.

Had all of us known that the field in question is in the Skagit, Washington, area, in February, we could be fairly certain that our assumption that all geese in the picture are Snow Geese would be correct, because this area supports all (or virtually all) of the Siberian-breeding Snow Geese during winter. Because Ross's Goose does not breed in Siberia, instead would arrive locally from a somewhat mirror direction, records of the species in the area are exceedingly few. I took this picture of a mass of Siberian Snow Geese on 5 February 2006. There were at least 3 Siberian neck collars on geese close to the road; who knows how many more there were amongst the masses. Thanks to Cameron Cox for escorting me here and explaining about these geese.