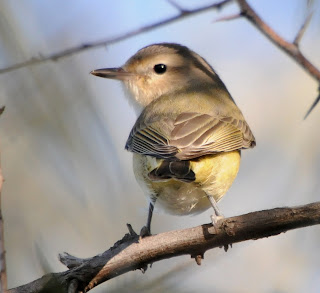 Warbling and Philadelphia vireos tend to cause birders fits for a number of reasons, two being

1) field-guide treatments tend to be minimalist and

2) many birders are unaware of the sizable amount of plumage variation in both species (partly because that variation is not typically presented that well in field guides).

However, I believe that the primary reason is that birders tend to consider a particular feature in a dichotomy: Warbling lacks dark lores, while Philadelphia sports them in spades. No in-between. No gray areas. No studying other field characters.

Our quiz vireo presents one of many individuals of the two species in that gray area. It sports dark lores, but they are not very dark and do not contrast at all strongly, thus being at the Warbling end of the gray area. We should look at other features to confirm or reject our initial hypothesis that the quiz bird is a Warbling Vireo.

The bird's crown is pale gray, not contrasting all that strongly with the whitish superciliary nor with the greenish-gray back. In fact, the color tone of both crown and back are virtually identical. Additionally, the bird shows no suggestion of yellow on the throat, which even the dullest of Philadelphias sport. One of the other features that I use in identifying members of this duo is the darkness of the flight feathers: very dark in Philadelphia, more gray in Warbling. Because of the angle of the bird in the picture, I don't know that I'd trust the apparent coloration, but the birds remiges do appear gray rather than blackish, though the bird's tail seems very dark. However, note that most of the tail is in shadow; the base is noticeably paler.

This western Warbling Vireo (western members of the species tend to be brighter than eastern members) was photographed at Prewitt Reservoir, Logan Co., CO, by Steve Mlodinow in September 2011.

One submitted answer omitted capital letters, so was considered incorrect for the competition.