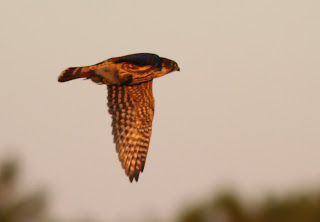 Of the respondents that provided a second species in their answers, six of 13 got that second species correct. Unfortunately, seven respondents provided only one species in their answers. The obvious species was determined by most to be a falcon, with most respondents using the overall darkness, the relatively rounded wingtip, and the wide dark subterminal tail band to ID it as a Merlin. I have used Merlin as a quiz bird at least five times so far (out of the ~300 quizzes that I've conducted in this venue) and at least once before, the Merlin was carrying a prey item captured at or near Cape May Point State Park, Cape May Co., NJ (this one in fall 2010, but as I'm having trouble with an external hard drive, I cannot get the date right now). The previous example, Quiz #276, was carrying a Tree Swallow that I saw the Merlin catch. This one, however, came in off the water shortly after sunrise carrying the hapless victim and I photographed it primarily to attempt ID of the prey item.

Many respondents thought that the prey item was a swallow, but looking closely should provide all the characters needed to correctly ID it... as long as one correctly determines the position in which the bird is being carried. The bird's upperparts are against the Merlin's belly, so we're looking at the underparts, and that long, black tail below the bright rufous vent is really all we need to see (though the distinct black crown contrasting with gray on most of the rest of the plumage is also helpful) that the prey item is a Gray Catbird. I have provided, below, an enlarged section of the quiz image that illustrates the points noted above.